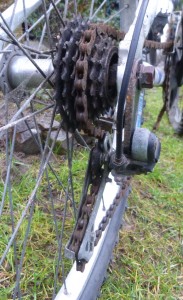 When I first started out repairing bikes for a living, someone asked if I could service a mountain bike which had gear problems, and which had been sitting around outside for ages (think rust and flat tyres!). It was a cheap bike to start with, the owner was on the edge of scrapping it…  Fortunately this is the type of job I enjoy doing, it stops things going to landfill and gets people back on the road again.

This bike turned out to be a challenge, as a lot of parts fitted by the previous owner (which I suspect was a bike shop) were wrong for this bike.

First things first, the chain is rusty and a few of the links are completely seized. While it’s sometimes worth rescuing a rusty chain this one was stretched too, so it gets replaced. (this was the only new part I bought for this bike, everything else was second-hand) 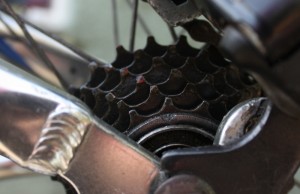 Next on the list are the rear gears, in this case a screw-on freewheel. We see that the teeth are worn, especially on the smaller sprockets, which will cause the chain to skip when pedalling hard.

Not only was the gear cluster worn, it was also a 6-speed. Nothing wrong with that, until you realise that the gear shifter is a 7-speed which means the gears were never going to shift properly; No wonder the owner left the bike unused for years! Replacing with a 7-speed cassette solves the problem. 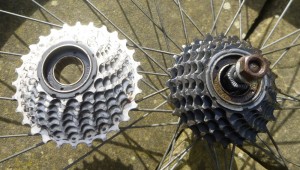 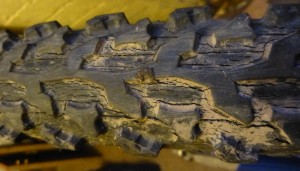 Tyres are next, and these have seen better days…

As the owner planned to use the bike mainly in town (as opposed to cross-country) I fitted some tyres which were smoother (see photo at the end of this article). A bike with smooth tyres is easier to ride on the road (takes less effort). 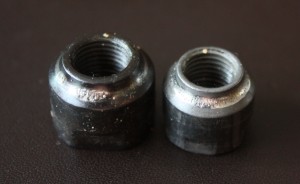 As with a lot of bikes that aren’t regularly serviced, the cones inside the wheel bearings were damaged, so they get replaced too. 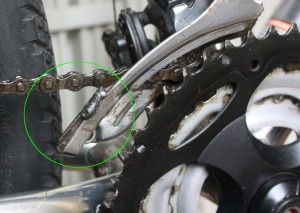 Back to the gears, the front dérailleur is wrong for this bike as it’s a triple chainring confiration, but the dérailleur is a ‘double’ version (the metal ‘arms’ are shaped differently). We could have swapped the dérailleur but as we’re on a budget a small piece of metal welded onto the arm will do the same job. 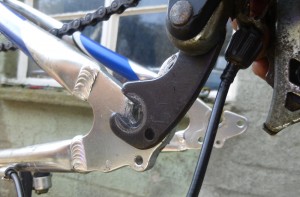 The rear dérailleur isn’t much better; the frame is equipped with a hanger but someone in the past has attached one of the older-style dérailleurs which is joined to the bike frame via the axle bolt. This would have been OK if there was a second bolt holding it in place (to stop it rotating around the axle) but there isn’t. It could be ignored but I find it’s ‘peace of mind’ to do things properly, so I tapped a small stud into the frame to secure the dérailleur and make it safe.

The finished bike. Quite proud of this one!

I charged £50 for this, it’s enough to keep me happy but low enough to mean that repair was viable. 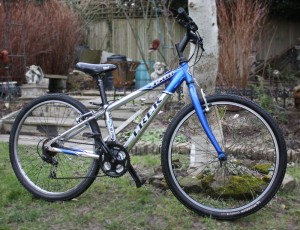