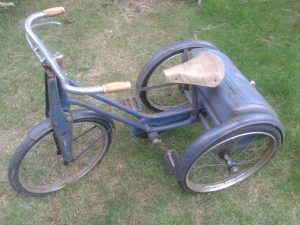 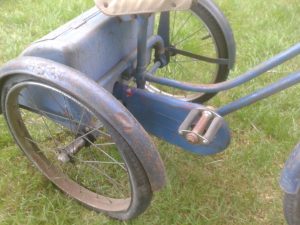 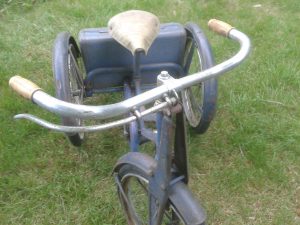 An old Raleigh tricycle which was ridden as a child by the owner, now wishing that it be restored so that his granddaughter could also enjoy it.

The first time I’ve worked with rod brakes, but they were easy to understand. After the front wheel had been trued and the yoke bent to it’s correct shape they worked quite well too. 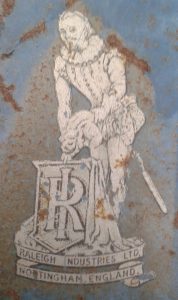 lthough it may have had some antique value I’d been asked to ignore that and repaint it which is a pity because the original Raliegh logo will be lost. 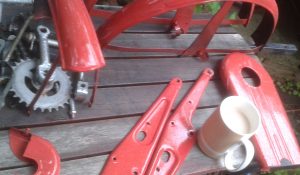 Some parts being painted

Mechanically the job was much like servicing a bicycle, a complete strip-down. 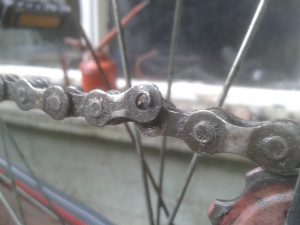 The only broken part was a chain link, three new tyres were needed, there was quite a bit of straightening of parts, removing dents, forming mudguards to their correct shape, etc. 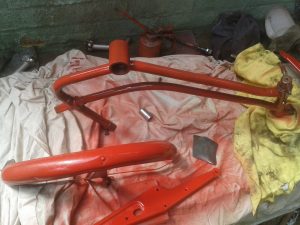 As sometimes happens with cotter-pin cranks the pin on one side was ruined while extracting it, but replacements are cheap. All bearings lubricated, Brakes aligned, etc

The biggest part of this job was painting, I didn’t get on well with Hammerite aerosol paint (quite runny), nor Hammerite from a tin (quite thick!) but as the paint was already bought I was committed to using it. The finish wasn’t really to my liking and if I had to do the job again I’d probably use primer/topcoat/lacquer layers as you would on car bodywork, or maybe get it sent off for powder-coating for a really good finish.
Rust was removed from the chrome parts (handlebars, stem, wheel rims), and sealed with wax. 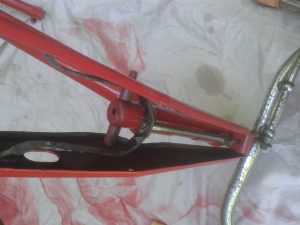 Showing the simplicity of the braking system 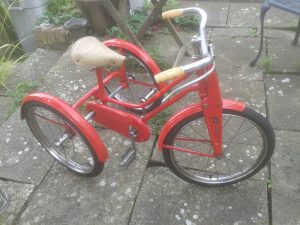 The finished trike, although this photo was taken before the back box was refitted. I charged £50 plus parts, but there’s actually about 2 day’s work there, so I’d charge a bit more if I ever do anything like this again.