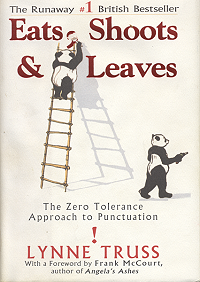 When I first became self-employed back in 2014, I named my business Bytes, Bolts and Leaves as it represented the work I was doing at the time (Computer, Bicycle/Handyman, and Gardening).
Some of you might have spotted that the name is a twist on the book title “Eats, Shoots and Leaves”, see photo on the right.
Despite recently changing what I do, I’m keeping the same name.

In 2016 I decided to stop doing garden work (i.e. the ‘leaves’ part of my name) as it’s not something which I’m an expert at. I always felt I was constantly fighting against mother nature, unlike an experienced person who would know how to let the garden work to it’s full potential, which plants to put where, the best time of the year to perform certain jobs. This isn’t me I’m afraid, and probably never will be.

Similarly, I have gradually found that Handyman work can be awkward if you don’t have the right tools, a works van, and experience. Don’t get me wrong I have done some good work which I’m proud of, but I found that many of the jobs people were offering me would be better suited to people who are kitted out to do them. Another reason I found this difficult is that I try to walk or cycle to as many jobs as I can, and carrying tools and equipment is difficult!.

So… Computers and Bicycles? These are the things I’m really good at, and I’m concentrating on these as my main business. Contact me if you have either of these which isn’t behaving as it should be!
Thank you,
Dale