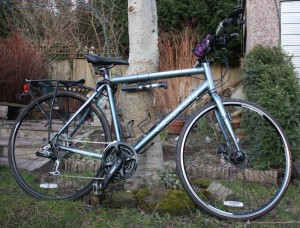 The owner of this Carerra Gryphon bike occasionally does long-distance touring with heavy panniers, and wanted to have some lower gears. 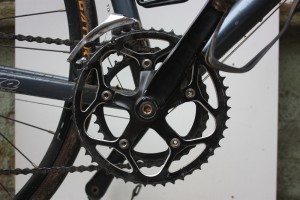 To achieve lower gearing [while retaining the top-end high gears] we could have put a larger-range cassette on the back, but it was already a 11-32 and increasing this would mean a compromise on gear steps and probably a larger dérailleur (although having a massive range on the rear cassette seems to be a popular approach on mountain bikes recently). 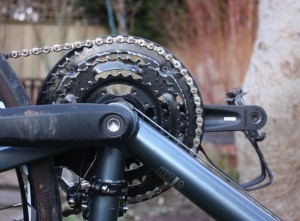 Instead we swapped the front chainset from a ‘double’ (see top photo) to a ‘triple’ (bottom photo). As well as the reasons above, I already had a suitable second-hand crankset in stock, and the gear lever on the handlebar was already a 3-speed. Seemed the obvious thing to do. 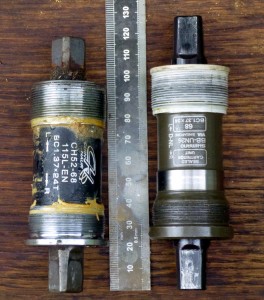 Along with the crankset change, I swapped the bottom bracket for a longer one, so that the front dérailleur could reach all three chainrings. Again this was a second-hand part which was in good condition. (had I not done this, the ‘granny ring’ (the smallest sprocket) would be very close to the frame, most dérailleurs won’t cope with this) 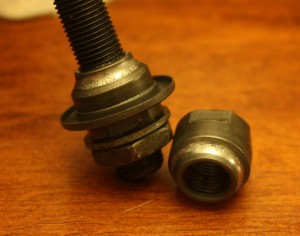 As well as the gears, the owner asked me to do a full service, as the bike hadn’t had one for a long time. As part of the service I replaced a broken spoke on the rear wheel and some pitted bearing cones (see photo)

I charged £80 for this. The customer delivered and collected the bike, so there was no travel costs.

Although my work lets me ride a lot of bikes, I was surprised as to how much I enjoyed test-riding this one. I can see why the owner wanted to keep it!