A desktop PC (an HP Pavilion P6320uk) which wouldn’t start, the screen just shows “Boot device not found”. The PC is used for business use so a quick fix is important, and to help I lent out my spare laptop while the PC was being fixed (even though that took less than 24 hours)

Back to the repair… First thing is to remove the hard disk and make an exact copy of it (which gives us a backup copy, just in case anything goes wrong while we’re repairing it). Unfortunately this hard disk is physically broken; the BIOS recognises it, but the disk can’t be read even from a different computer; This is bad news because:

This isn’t a nice situation to be in, but there are several ways out… 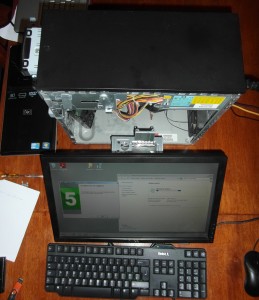 Fortunately the owner DOES have a set of recovery disks which is great. The bad news is that they’re not sure where those disks are! In this situation we got the PC working again quickly by installing a non-OEM version of Windows as I mentioned above, although we won’t be able to ‘activate’ the license. This isn’t legal, but in my defence it’s only a short-term measure, and will be rectified the minute the owner finds their recovery disks.

The photo shows the PC being rebuilt. The new hard drive has been fitted (all be it loosely inside the case at this point), and the updates & extra software (as per a factory reset) are being installed.

I charged the customer £50 for this, which includes installation and email configuration using Live Mail, the price of a second-hand [but thoroughly tested] hard disk, and a second re-build/configure which will happen when the owner finds their recovery disks. After the second rebuild I’ll be showing the person how to use cloud storage, so they don’t loose any more information in the future.

So what have we learned ?